Commercial airliners have limited lifespans. Ultimately, they must be retired from service, stored in "airplane boneyards" or graveyards, and finally dismantled and scrapped. Some of these boneyards are located in the dry deserts of California.

Others are located in Arizona, including Davis-Monthan AFB AMARG, Pinal Airpark and the Phoenix Goodyear Airport.

California has historically been a perfect locale for the storage of surplus aircraft. After World War II, the Ontario aircraft boneyard at Cal-Aero Airfield east of Los Angeles was established. The Reconstruction Finance Corporation (RFC) established a sales depot at the inactive Cal-Aero Field, although it was referred to by the RFC as "Ontario". Nearly 1,900 military aircraft would be transferred to Cal-Aero, of which about 500 were sold and the rest dismantled. Read more about the Ontario boneyard.

Another storage facility and boneyard was located at China Lake, California. Many of the B-29s in storage there were destined for target practice. Several well-known Superfortresses were saved from China Lake, including FiFi, Peachy, Doc and others. Today, no more aircraft exist at the former China Lake airplane boneyard.

Jetliners eventually reach end-of-life due to airframe wear and/or obsolescence. Some jetliners are temporarily taken off flying status, and must be stored in a environment that is conducive to preservation. Others are kept for spare parts for flying aircraft.

To protect airliners during their storage from wind and sun damage, engines and windows are tightly covered with white, reflective materials. A sealed airliner can thus be stored safely, for years, until the time comes to return it to active duty, or salvage. Eventually, all airliners are removed permanently from service and must be "disposed" of.

The two facilities are located only about 70 miles apart, within a driving time of about 1:25. 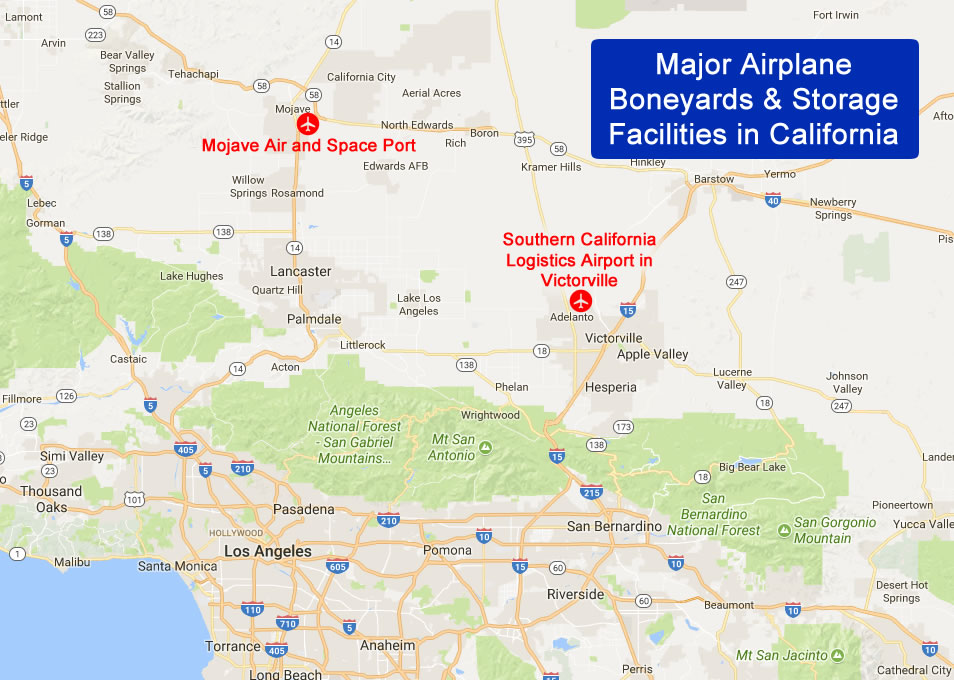 The City of Victorville is located on Interstate Highway 15 between the San Bernardino area and Barstow. SCLA is about 7 miles northwest of the city.

The facility is located on the site of the former George Air Force Base, in active service from 1941 to 1992.

The airport features a precision instrument runway of 15,050 feet  and a secondary runway length of 9,138 feet to accommodate any aircraft flying today.

The boneyard and airliner storage areas can be found just north of Air Base Road (Air Expressway). While you can drive through some of the the streets and roads at SCLA, most business and industry areas are restricted. No organized tours are available.

As always, we recommend obeying all warning signs and avoiding restricted areas.

Directions to SCLA from Los Angeles

The airport is located about 90 miles northeast of downtown Los Angeles; driving time is about 1:30, depending of course on traffic.

The most direct route from downtown LA is via I-10 East and then I-15 North. Take Exit 151B (Mojave Drive) and proceed north on Village Drive to Air Base Road (Air Expressway). Drive west and the airport entrance will be on the right.

SCLA is about 195 miles southwest of Las Vegas, Nevada. Driving time is about 3 hours. Drive west on Interstate 15 and take Exit 153A (Mojave Drive) at Victorville.

Proceed north on Village Drive to Air Base Road (Air Expressway). Proceed west, and SCLA entrance will be on the right.

... about the Southern California Logistics Airport and view an interactive map with driving directions

The Mojave Air and Space Port serves a variety of aviation and space industries. It is also a storage facility for commercial airliners, due to its vast area and dry desert conditions.

Large Boeing, McDonnell Douglas, Lockheed, and Airbus aircraft owned by major airlines are stored at Mojave. Some aircraft reach the end of their useful lifetime and are scrapped at the Mojave aircraft boneyard, while others are refurbished and returned to active service.

The Mojave Air & Space Port is located on California Highway 58 between Edwards Air Force Base and Tehachapi.

Directions to the Mojave Airport from Los Angeles

The airport is located about 95 miles north of downtown Los Angeles; driving time is about 1:45, depending on traffic.

One route is to follow Interstate Highway 5 north, and take Exit 162 onto California Highway 14. Drive north through Palmdale and Lancaster. As you approach the City of Mojave, turn right onto the Mojave-Barstow Highway, and turn left onto Airport Boulevard at the airport entrance.

Directions to the Mojave Airport from Las Vegas, Nevada

The Mojave Airport is about 225 miles west of Las Vegas, Nevada. Driving time is about 3:30 hours. Drive west on Interstate 15 and take Exit 179 onto California Highway 58 at Barstow.

... about the Mojave Air & Space Port and view interactive map with driving directions

A number of airliner maintenance, repair and overhal (MRO) companies are lcoated at the airport, including Aero Pro, Unical, Pulsar Aviation Services, and Stratus Aircraft Services. Companies such as Unical are involved in aircraft storage, deactivation, engine removal and end of life solutions.

The physical address of the airport is 1601 East Third Street, Suite 100, San Bernardino, CA 92408. For information, phone the airport at 909.382.4100, or visit the San Bernardino International Airport website.

... about the San Bernardino Airport and view interactive map with driving directions

Virtually all airplane boneyards and storage facilities are limited access sites and do not allow visitors. We encourage potential visitors to check with individual sites to learn about access policies and tours. As always, we recommend obeying all warning signs and avoiding restricted areas.

The largest boneyard in the world, at Davis-Monthan Air Force Base in Tucson, does allow tours of its Aerospace Maintenance and Regeneration Group (AMARG) facility.

Advance reservations for the tours are required, and must be made through the nearby Pima Air & Space Museum, across East Valencia Road from the base. Bus tours also originate at the museum.

Looking for a place to see vintage aircraft in California?

For those interested in aviation, there are numerous opportunities and venues to see and explore vintage aircraft of World War II, the Korean War, the Cold War, and modern-day aircraft. California offers a wide variety of aviation museums, including those described below.

A group of dedicated enthusiasts in the Atwater-Merced area formed the Castle Air Museum Foundation, Inc. which is now a non-profit organization. Its purpose is to build a facility in which faithfully restored historic airplanes could be exhibited for public enjoyment.

It opened in 1981, on a site adjacent to the former Castle Air Force Base. Most of the workers there are volunteers, and the small admission charge helps defray restoration and maintenance projects on the vintage airplanes. The U.S. Air Force does not provide any funds for maintenance and repair. Today, the facility displays 54 restored World War II, Korean War, and Cold War era planes.

Click here for more information about the Castle Air Museum

The March Field Air Museum is located near Riverside, California, at the site of the former March Air Force Base (now the March Air Reserve Base).

The museum includes an impressive collection of over 70 historic aircraft, displayed both inside hangars and outside galleries. In addition, the museum features numerous exhibits, over 30,000 aviation artifacts, photographs, poster collections, and a Library Education Center.

A gift shop is also located on site. Parking is free, and small admission cost is charged.

We have personally toured this fine facility, and enjoyed meeting the friendly, knowledgable staff and volunteers. We highly recommend a visit to the March Field Air Museum.

Copyright © 2020 AirplaneBoneyards.com  All Rights Reserved.
An online resource about facilities engaged in the storage, reclamation & disassembly of aircraft ... we do not own or operate a boneyard, or have an affiliation with any boneyard, the Department of Defense, or any aviation museum or tour group